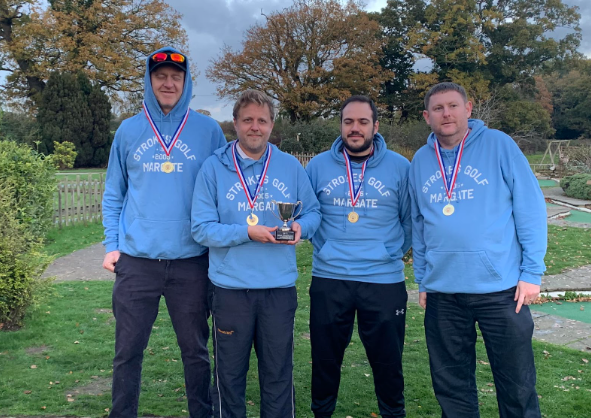 Once again the competition proved to be highly contested, with almost half of the matches going to the final hole. It was Strokes of Genius who were victorious, unbeaten on the day,  led by captain James Rutherford, with Andy Wilde, Chris Wood. and Matt Dodd. Strokes of Luck took the Silver Medal. Putt out to Grass of Planet Hastings Crazy Golf Club, led by Ted McIver took Bronze.

A special mention for Putterfingers, who were at a severe disadvantage in only having three players, but very much enjoyed the day.

The Competitiveness and spirit in which the Championship  was played once again demonstrated what an exciting team event this format provides.

Full results can be seen here 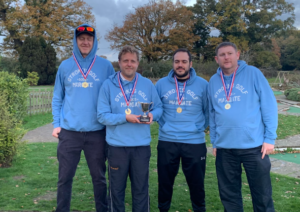 The Final word from the winning captain. “The club championships has always been one of my favourite events and I’m delighted that we’ve won the tournament at the first time of asking with Strokes. Both teams performed brilliantly and picking up 1st and 2nd was definitely the target at the start of the day so it’s a great result in that respect.

I’m delighted of course for myself, Chris, Matt and Andy as we gelled really well as a team on the day and special mention to Andy for playing through the pain barrier. Our match against Thanet was certainly the highlight as we somehow managed to fight back from 4 down to draw the match. A big confidence boost against a really strong team. Our match with Stroke of Luck was also incredibly close with an ace from Andy on the last hole winning it for us. So there was very little between us on the day.

Looking forward to defending the title next year!”