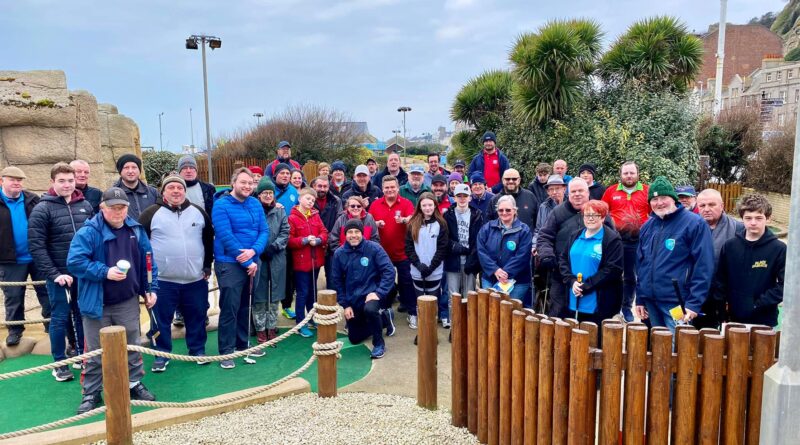 On a cold (but dry) day in March the scene was set for the 20th running of the Planet Hastings Open.

The Competition had a different look to it this year, consisting of 3 rounds solely on the Adventure Course and with 50 players entered this was the biggest field in Planet Hastings Open History.

With this new format there was sadly no room for the Big Top Ted Tombola or the Hole in One challenge (sorry Ted).

After the first round it was clear to see that this would be a very challenging competition as only Dave Gomm, Richard Jones and Paul Tutt carded a score under par.  But with the likes of Simon Brown, Seve Kukielka, Martin Greenhead and Chris Smith shooting a very creditable even par and Steve Lovell and Tim Novis on one over, it was evident that there was a still a long way to go and that those who could maintain that standard would be in the running.

Round two saw Michael Smith and James Shaw post scores under par and several players scoring under 40 which is a fantastic achievement on that course under tournament conditions and would lead to a very tight leaderboard going into the last round.

The final round would see only 4 shots separating the top 10 players so it was all to play for… but it was Michael Smith and Dave Gomm who would finish the competition as the top two players, each with a total score of one over, resulting in a play off to decide the winner.

After the third play off hole it was Michael who was triumphant and was crowned the 2022 Planet Hastings Champion, which meant that Dave was pipped into second place. Simon Brown finished the competition in third place and was only one shot behind Michael and Dave. A superb effort all round!

Michael won the trophy with only 5 aces but more importantly he only dropped 6 shots in 54 holes, which is a massive achievement on the Adventure Course and goes to show the value of consistency.

Paul Tutt set a new official competition course record with 32 (we won’t mention his other scores).

I would just like to personally thank every single player that competed in the Planet Hastings Open 2022.

Without all of you this event would not have been the success it was, I really hope you enjoyed the day.

A special congratulation to all the Juniors who took part in the event – Matty Exall, Cameron Fincher, Harley Kelly, Kane Hawkesford and Leila Ellison-Brickley – all performed amazingly well on a very tough course and in cold conditions.

Well done to our winner Michael Smith. Michael, Dave and Simon along with many others showed a high level of consistency on a very tough course

I would like to thank Chris, Simon and everyone else at Hastings Adventure Golf for letting us host the competition and helping us to ensure the day ran smoothly. Also Elvie & the catering team for keeping us all fed and watered – and with a generous discount too.

Special mentions go to David and Maron Hartley for all their hard work and effort in helping me organise and run the event. Without their help I would not have been able to host a competition of this size. Also Martyn Williams for doing such a great job with the scoring and Clare, Donna and Poppy for being there to help out on the day.