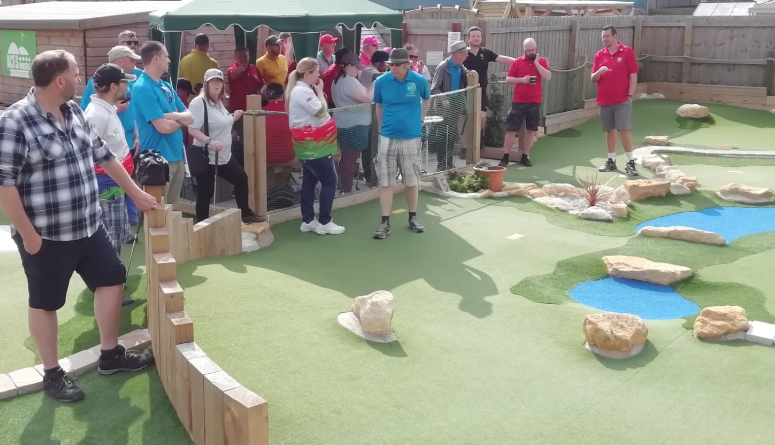 The Gloucester Aces hosted their very first club open on a pleasant and dry Sunday in May.

A field of 41 players took to the 12 hole course at Aces Minigolf Gloucester to compete over 4 rounds for the chance to lift the Gloucester Aces Championship belt and £110.

This was the first ranking tournament held at Aces Minigolf and it promised to be a closely fought tournament.

The first round threw up some amazing scores with both Helen Dodd and James Hollinrake shooting a -4 bogey free round of 20 to lead the field by 1 shot from Simon Brown, Stephen Skinner, Rachel King and Ted McIver. An incredible 17 players managed to hit an under par round on the challenging course where Aces can be hard to come by.

The second round saw the course record set by the surprise Marton Geda from the Welsh Minigolf Club with an amazing round of 18 (-6) shooting six aces and six twos. This put the Hungarian player on -8 at the halfway stage and he held a two shot lead from his teammate Stephen Skinner (21, 21) who was also playing exceptionally well.

The third round saw the two players out in front stumble slightly as both Marton and Stephen post scores of 25 (+1), this allowed some of the more experienced players to come back into the fray with course owner Seve Kukielka, Rocky Bullin, Ed Pope and Chris Smith all within touching distance after Round 3. Local favorites and newcomers to the tour Richard Maud and Rachel King was also quietly ascending the leaderboard both playing supremely well with a 3 round total of 66.

The field was incredibly close after 3 rounds with only 4 shots separating the top 11. There was a mix of new and experience players at the top and it was truly anyone’s tournament going into Round 4.

In the end, course knowledge was paramount with both Richard and Seve posting rounds of 20 (-4) to jump up to claim the top 2 positions, Richard finished one shot ahead and amazingly won his first Tournament less than 8 months after taking up the sport. Ed and the impressive Marton were one shot further back and ended up tied 3rd, Ed managed to take 3rd place overall after an ace at the first playoff hole which Marton couldn’t match.