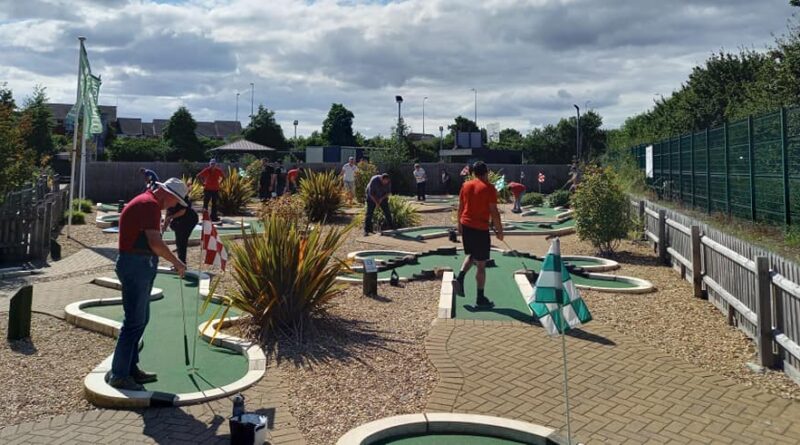 It was a record breaking day in Peterborough as some of the country’s best minigolfers tested their mettle against the challenging twelve hole minigolf course at Dobbies Garden Centre for the fifth running of The Putterfingers.com Sussex Wasps Open. A dominant Ed Pope., the lefty from Leicester, led from gun to tape to break the tournament record total with ten under for his second title after winning the Cardiff Open in 2019. His club captain, Steve Lovell, battled back to take second place seven shots back with James Hollinrake of Thanet Silverbacks joyfully securing his first podium finish on two under. A record field of thirty two played for the title.

The tournament was unique for a number of reasons, with the course owners at Peterborough Minigolf granting not only exclusive access for the tournament day, but also three hours in the afternoon before, which is unheard of at club open level. Many participants took advantage of this, arriving as early as Friday for practice. The Sussex Wasps also embraced the support of a local entertainments company Putterfingers.com, who provided a £50 voucher for anyone who could ace the lucky last hole and six entrants, who were made to feel extremely welcome to the rigours of competitive minigolf. And, as with every year, every person who took part went home with a prize.

An overwhelmed Ed Pope said afterwards, “I’m lost for words, I’m not used to doing this. Thanks to everyone for coming, it’s been a massive tournament, the biggest we’ve ever had. I will look after the shield, I promise you.” Steve Lovell was gobsmacked by the day. “I’m always glad when the event gets to the end of the day and everyone goes home as happy as possible. Compared to where this event was in 2017, where we had fourteen players and had to mix in with the public, we’ve now got exclusive access from the course and a wonderful event sponsor. I know they had done their research, getting some great advice from Richard and Emily Gottfried. My biggest worry is remembering to thank everyone at the end, so thank you to the Fitton family, who own Peterborough Minigolf, thank you to Putterfingers.com, thank you to everyone who has travelled from different parts of the country to take part, and we look forward to making 2022 even bigger.”