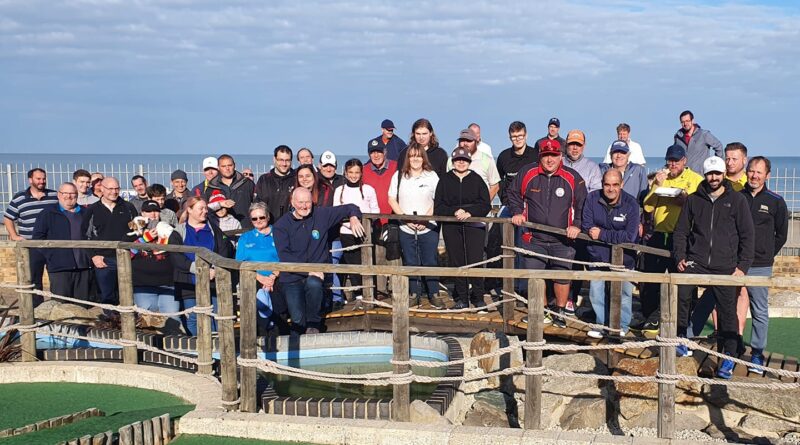 Michael Smith won the 2021 British Championship, over the weekend of Saturday 16th and Sunday 17th October, with a hard fought victory over seven rounds at Strokes Adventure Golf, Margate.

In overcast conditions, Michael secured his fifth title with a seven round total of 231 (21 under par) at an average of 33 strokes per round.

Defending Champion Marc Chapman made a great title defence in finishing second, eight shots back on 239 (13 under par), with Seve Kukielka, continuing his fine season, taking the bronze medal with a score of 244 (8 under par). 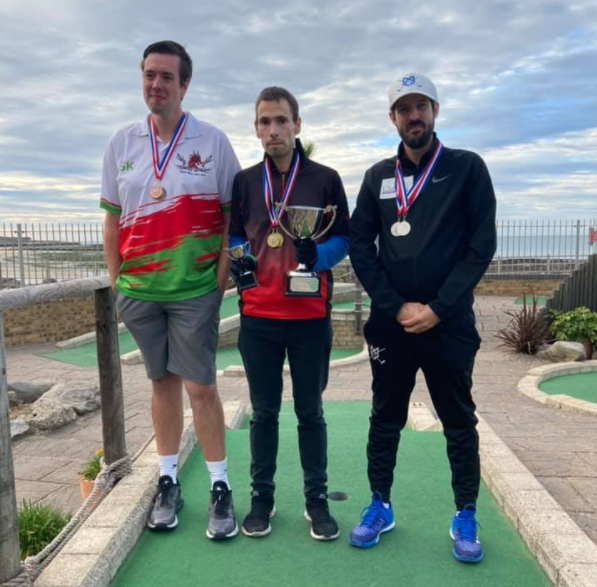 Speaking following his victory, Michael Smith said “I’m delighted to have won the 2021 British Minigolf Championship. Strokes Adventure Golf is, for me personally, the most visually beautiful course in the country. However, it is also one of the most challenging, especially in colder conditions. Last weekend it was playing as difficult as I can ever remember, and it was so tough to get aces. Despite that challenge, it was as enjoyable a weekend playing outdoor minigolf as is possible in October. I’d just like to reiterate my thanks to Matt Wood and his family for once again hosting the BMGA on their course. It has no equal to the variety of challenges offered by every unique hole. I’d also like to thank the BMGA Executive Committee for all of their hard work in general and especially for running the tournament and Friday’s BMGA Matchplay Championship so smoothly.”

As usual there were also a variety of different class championships being played over the  weekend, where all four defending champions retained their title. It was also pleasing to see all clubs represented on the podium.

It was a tale of two days, with Martin Greenhead who had a stunning second day to overcome a day one deficit of fifteen shots to retain his title by five shots from Scott Lancley. Martin finished on 246 (-6), Scott 251 (-1) with Derek Bentall a further shot back on 252 (level par). 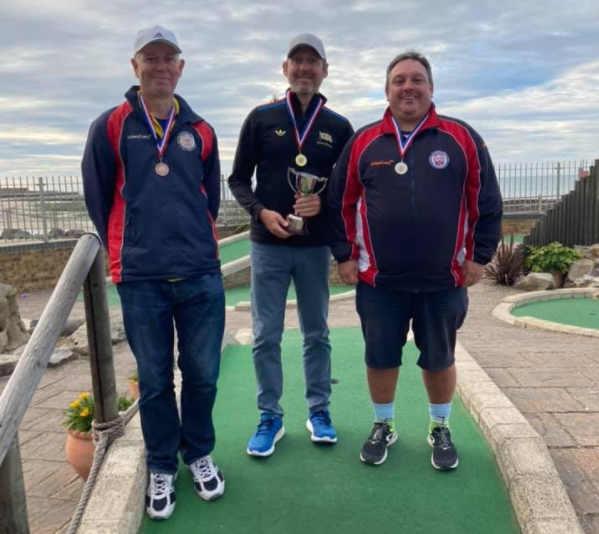 Speaking following his three peat, Martin said “Strokes is a great course, very technical and challenging, I always enjoy the weekend in Margate and it was excellent to see such a large field with new players joining the tour. It was a tough couple of days, especially, with Scott racing away at the start in the Seniors, but it all seemed to come right for me on Sunday. Thanks once again to Matt and Lex for hosting us, both on the course and the refreshments”

After trailing by 22 shots overnight, Shelley Cooper won the British Women’s Championship for a third straight year, it came down to the wire, by three shots with a score of 282 (30 over par) Laura Skinner came second on 285 (33 over par), Marion Hartley finished third with a score of 290 (38 over par). 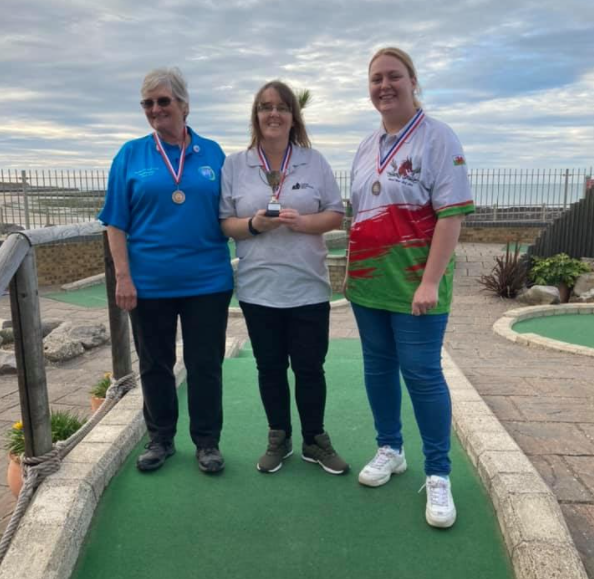 Following her victory, Shelley said “The British Championships at Strokes in Margate, what a weekend! So many highs and lows. Being crowned the British Women’s Champion for the third year in a row was a fantastic high. So happy to have achieved the hat trick”.

Cameron Fincher retained his junior title with a score of 270 (18 over par), which included a super 33 in round four. Cameron took the title by an impressive 24 shots from Matt Exall 294 (42 over par), with newcomer Elena Teubler taking the bronze medal with a score of 324 (72 over par) 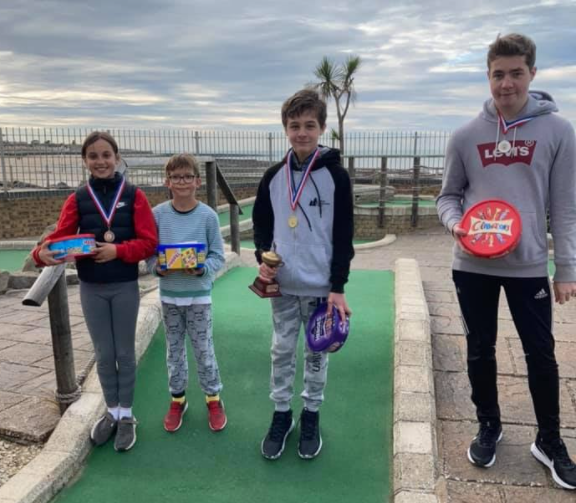 Speaking after his victory, Cameron said “ Am really pleased to win the Juniors trophy again at the British Championships. It means a lot to win at Strokes because it’s my favourite course and it’s not easy. Well done to all the juniors and thanks to everyone that supports me. Also well done to Michael on his victory.”

Andy Exall took the title and the ‘Dave Donnelly Silver Salver’, Andy shot 245 (7 under par) to retain his title by 3 shots from Mark Wood, 248 (4 under par) with former champion Terry Exall third on 259 97 over par) 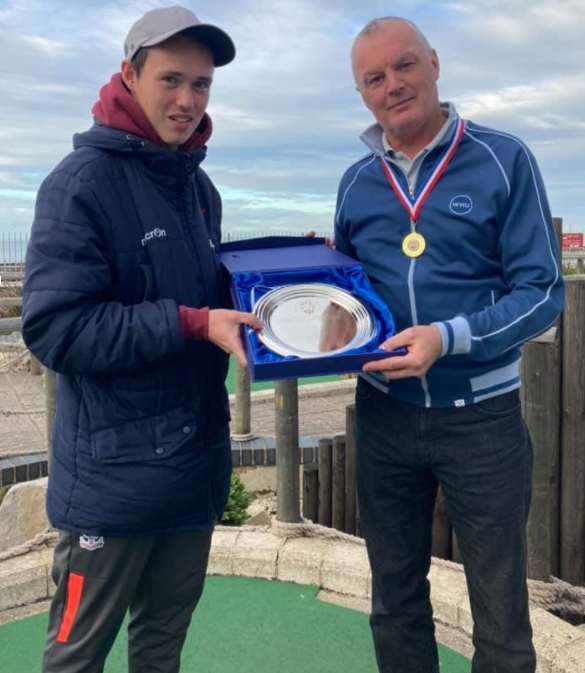 Speaking afterwards Andy said “It was nice to return to my favourite course again, I felt confident about retaining the SS category win after some good practice rounds a week earlier but that counts for nothing as has been proven there often over the years! Despite getting the most aces out of anyone, far too many dropped shots left me only one shot clear of Mark going out together in the last round, it could easily have gone either way when Mark (going before me) aced 11 & then 13 but thankfully I held my nerve on both holes. Mark dropped a couple of shots later to give me a bit of a cushion & luckily I managed to win again. A great, tense, competitive round though, how it should be & thanks to my playing partners: John Sharp,  Paul Tutt, the awesome Cam Fincher & of course Mark Wood for the great company over the weekend & as always thanks to Matt, Lexi & family for their great hospitality. Congratulations to Michael on another super win too, a fraction too good for both Seve & Marc this time around”. 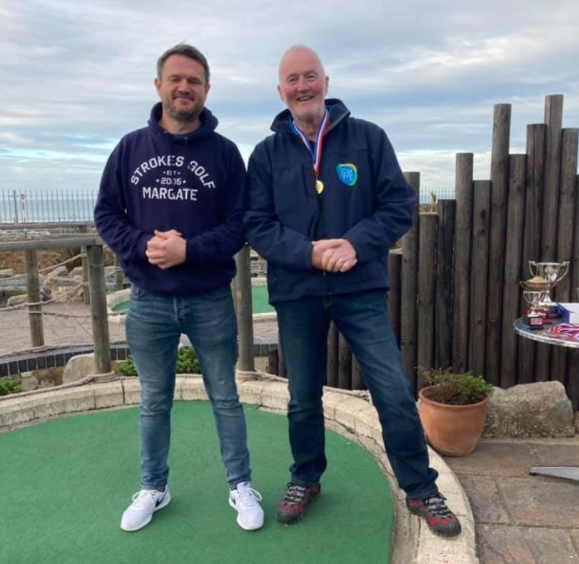 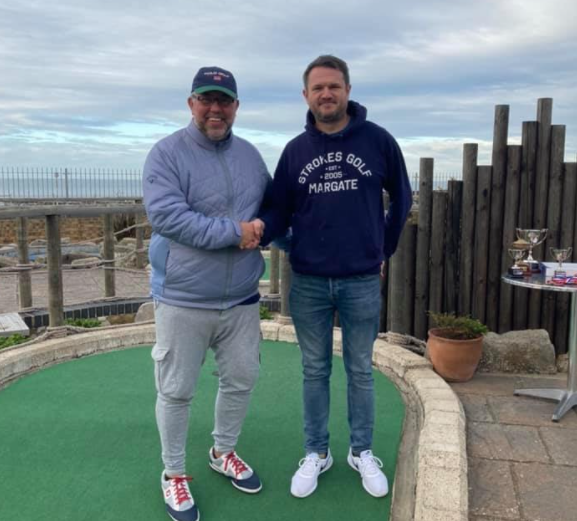 Full results from the weekend can be found at https://bmga.online/results/2021/2021BC/straight.htm

Following the weekend, a few words from BMGA Chairman Scott Lancley “As always, Strokes Adventure golf, backed-up to its claim as being the  toughest course on our Annual BMGA tour, challenging all forty five participants. The weather was great but the course hole to hole asks for consistency.

Congratulations to all those  who made the top three positions in the five British  titles on offer this weekend.

Special mention to Matt & Lexi Wood for the condition of the course, and the way they look after our needs over the complete weekend. We are very grateful for their continued support of the Association which goes back to our first tournament there over 15 years ago.