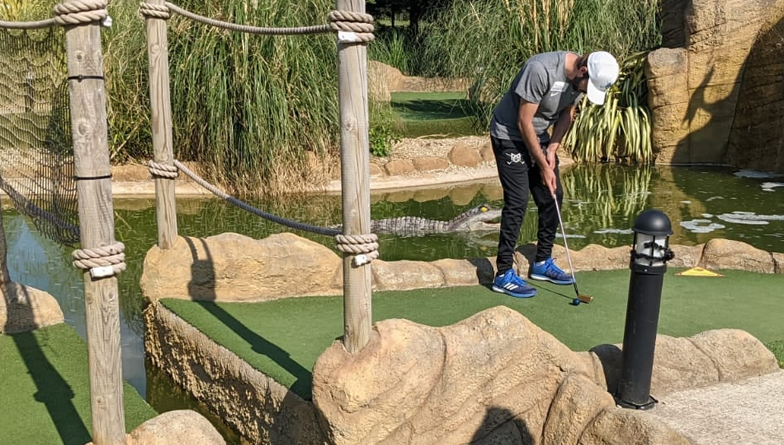 The Cardiff Open 2021, the second official tournament to be held on the course was contested on a typical hot summers evening at Tee Rex Adventure golf at the Cardiff Golf centre.

Ed Pope, the first winner of the tournament in 2019 was there to defend his title against a strong field. Nothing was certain.

The tournament tee’d off around 5pm using a new system to minimise the handling of score cards and to minimise times in between rounds in this uncertain Covid times.

After round one, Marc Chapman took the lead by 1 shot over an in form Matt Dodd and a brilliant performance by the Welsh minigolf clubs own Balázs Tompa.

Marc really started to pull away with a course record of 31 in round 2 and a 32 in round 3 with an impressive score of 97 and 13 aces.

Ed Pope came second, 6 shots behind with a score of 103 equalling the course record in his third round.
1 shot behind Ed, was the ever present podium placing Seve Kukielka with a 104.

Matt Dodd held on to take the Category 2 prize, while Category 3/4 was won by Sussex Wasps’ rising star James Shaw

Overall it was a fantastic day, it was a great distraction from the world and it’s problems. 10 shots between 2nd and 11th and 10 shots between 5th and 21st. That shows how close and competitive the field was.

A big thank you to Martyn Williams who always provides a great tournament, also thanks to Tee Rex for allowing us to play once again on a great competitive course. But for now, until 2022………