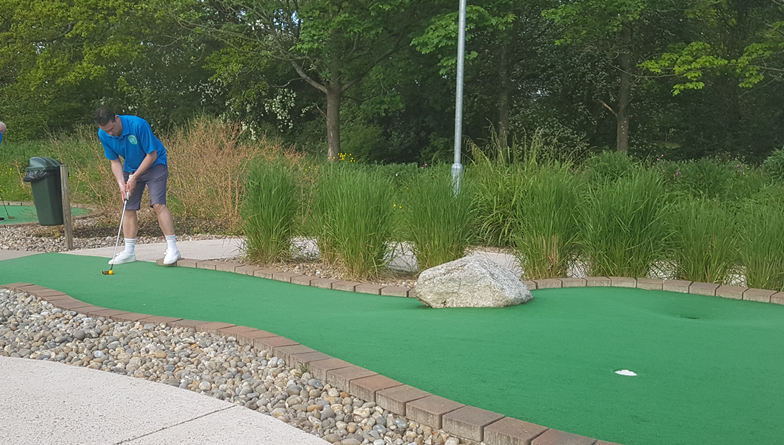 Saturday 29th May saw 39 minigolfers contest the 14th Midlands Open at Four Ashes Golf Centre, Dorridge. This was the 4th BMGA ranking tournament to be held on the popular but still relatively new 18 hole adventure golf course. The venue has previously hosted several other Midlands Opens, British Doubles Championships and British Club Championships on the (now dug up) 12 hole course.

The tournament, trophy and gold medal were won by Michael Smith, on an excellent score of 98 shots. Andy Wilde secured the silver medal in 2nd place on 100 shots, while Ed Pope secured the bronze medal in 3rd place on 101 shots.

Huge credit also goes to (amongst others):

Full results from the 2021 Midlands Open are available here.

This is the updated Midlands Open roll of honour:

The captain of Midlands Minigolf Club, Michael Smith, spoke shortly after the tournament: “I want to say a massive thank you to all the competitors at today’s Midlands Open. So many travelled such long distances and endured delayed journeys in addition to missing the Champions League final. The players also put up with Covid-19 mitigation measures which are undeniably tedious. The timings, number of players and Covid safety measures required by either government legislation or the course made the tournament almost impossible to organise. It would have been so much easier to wait until the end of social distancing (if that ever happens). But the gratitude and cooperation from the players made the immense amount of effort that went into the tournament worthwhile. A big thank you also to Brenda and Chris for all their help over the past few weeks in organising the tournament; to Brenda, Chris and Steve for being tournament referees; and to all the other players who offered to help. Finally, a special thank you to Andy Devane and all the staff at Four Ashes Golf Centre for hosting us in such difficult circumstances. The course remains incredibly popular within our minigolf community and MMGC is immensely grateful for the hospitality received by Four Ashes over the past two decades.”