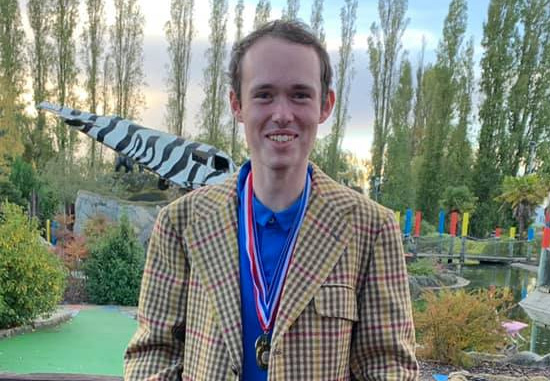 Sunday 25th October saw the 2020 version of the British Adventure Golf Masters taking place at Mr Mulligan’s Dino Golf in Sidcup, Kent. It was the third time the venue had hosted the event, having been previously played here in 2018 and 2019.

The Green Jacket, purchased at the British Heart Foundation charity shop, in Southend, in the early 2000s, was the prize that all 28 putters were after.

Following an overnight downpour, the course was drenched, which acted as a great leveller for the 2020 British Adventure Golf Masters leaving everything to play for. Given the state of the course, in places, it would require players to adapt their game to avoid the puddles, change some lines and keep the dreaded threes off the scorecard. Some players used sponges, plastic containers and brooms to help sweep the course before the 10.15 tee off time and this continued through much of the day, in order to keep the course as playable as possible.

Following the opening round, David Hartley, Steve Lovell and Will Donnelly were in the joint lead with rounds of 34. Last weekend’s British Champion, and 2011 British Open winner here, Marc Chapman was one further back on 35, alongside Derek Bentall.

The second round proved to be a challenge for all the players in unrelenting conditions. Only Marc Chapman and last year’s champion Mark Wood managed to muster under par scores with 35s. Will Donnelly hit a 36 to have a share of the lead with Marc. David Hartley, Steve Lovell and Derek Bentall all fell back in the second rounds but knew that there was plenty of time to recover the situation.

The third round is where Will Donnelly made his charge with a round of 34. Marc Chapman hit a 38 to be four shots further back in pursuit for his second Masters title. Paul Preston also managed to hit a 34 to be in second place overall on one-under-par, three shots behind Will, and in second place overall, going into the final round. Steve Lovell was one behind Marc on one-over-par.

Due to the Covid bubbles, the top three players were not in the same group together so it would be a nervous wait for those out earlier to see whether they had done enough to take the title. Marc Chapman was the clubhouse leader following a round-of-the-day 33. Steve Lovell had managed a 34 and Paul Preston a 36. This meant that the pair were tied, and one behind Marc.
Will needed a 36 to win and started his round with a bang. He was three under after five holes with aces on the second, fourth and fifth holes. It was all twos apart from that for Will which gave him a four-shot victory. He finished on seven-under-par for the tournament with a final round of 33, an equal best round in the tournament.

It was a first British Masters title for Will, meaning he is now the fifteenth winner in the twenty-first edition of the tournament. It was also his third victory at this venue, having previously won the 2014 and 2016 Kent Open here.

Paul Preston managed an ace on the second hole to take third place overall, beating Steve Lovell in the playoff.

There were various prizes contested across the day and a full list of prize winners can be seen below:

Full results from the day can be found at http://www.bmga.online/results/2020/2020BM/result.htm

A full photo stream of the prize ceremony can be found at https://www.facebook.com/BMGAMinigolf

The BMGA would like to thank Mr Mulligan’s Dino Golf in Sidcup for their hospitality over the weekend and looks forward to seeing everyone again on a minigolf course soon.