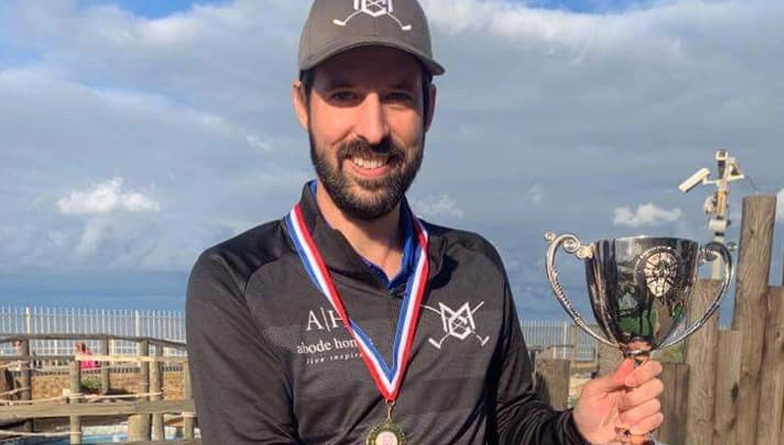 As the Sun began to set on a sunny afternoon in October, Marc ‘the Force’ Chapman pipped the UK’s No.1 Michael Smith to the title of British Champion 2020. In doing so he equalled a feat only shared by Michael in the 22yrs of BMGA history, winners of the ‘Triple crown’ made up of the three two day majors in the UK (The British Open, World Crazy Golf Championship & British Championship.)

The weekend was once again hosted by the great course that is Strokes Adventure Golf, Margate. This is the one of the special courses in the UK as it asks every participant to play each putt with bravery and precision all at the same time. The weather was kind to the 34 participants, it may have been gloomy at times. but both the wind and the rain stayed away for the competition to play to an end.

126 holes, seven rounds. would not only decide the Overall champion but the British Women’s, Youth, Senior and Super Senior titles. Saturday would require the participants to play four rounds and by the end of them Michael Smith had set the tone by scoring two rounds of 27(-9) and hold the lead by two strokes (120 / -24.)

Marc had replied in producing a round of 29(-8) and stayed in range at (-22.) Other noteworthy performers were Will Donnelly, shooting 29(-7) and David Hartley, who was the overnight leader of the Super Senior’s finishing the day three under par, after the four rounds.

The British Youth title went to the wire as in the final round Cameron Fincher, from Thanet Silverbacks MGC, managed to win by one stroke withstanding a bold fight-back by the defending champion and club compatriot Chloe Allart-Bennett, from Ramsgate. Third spot was taken by Planet Hastings Crazy Golf’s Freddie Novis. Special mention to Sussex Wasps Anton Bentall, completing the competition and producing a PB 49.

In the Super Seniors unfortunately the overnight leader was unable to stay ahead of the rest of the chasing pack which was won by Andy Exall (-15), from Royal Tunbridge Wells, Kent. Andy shot three emphatic rounds on Sunday shooting (-13) and finishing 3rd overall. Runner-up in this category was Chris Smith of Midland Minigolf (+2) and 3rd place one shot behind Chris was Mark Wood of Cambridge & Essex Minigolf club. The Super Senior plate was once again presented by Jean Donnelly, wife of the late BMGA member Dave Donnelly.

In the Seniors category Martin Greenhead (-8) of Cambridge & Essex MGC retained his title shooting rounds of 30,33 on Saturday. On Sunday he managed to hold off Steve Lovell, of Sussex Wasps MGC by two strokes. Third place was taken by another Sussex Wasp member Derek Bentall, whose best round over the weekend was a 32.

In the British Women’s competition Thanet Silverbacks member Shelley Cooper, retained her title shooting an average of 38.4. Runner-up Marion Hartley, from Planet Hastings, played consistently over the weekend and was four shots better than third place Midland MGC’s Brenda Smith. Special mention to Zita Tompa for completing the competition too.

Over the three rounds on Sunday, Marc overturned a two-stroke deficit to Michael and by round seven finished three strokes ahead including a final round sub-thirty (29).  Will Donnelly of Midland MGC, finished third in the general class (-12) but fell three shots short of overall third place.

Marc Chapman said, “That of the three majors, this was the one trophy missing from the cabinet. So to finally win it marks a clear moment in my minigolf career.”

Living not far away in Canterbury, he had been able to get some good practice in and use his experience of previously winning the British Masters at the same course. Note on Friday, Marc also won the ‘Players Champ’, a warm-up event, in which those spectating witnessed a thrilling last round in which only 6 strokes separated the top four finalists.

On reflection Scott Lancley, Chairman of the BMGA said, “This has been a great weekend at Strokes Adventure Golf with all 34 participants finishing the tough seven round tournament. I would firstly like to thank our hosts of the course Matt and Lex Wood, for a superb course and wonderful food and refreshment over the weekend. We all love returning to this course and look forward to returning next year. To all the winner’s congratulations you all richly deserve the plaudits. My thanks to all the participants for impeccably observing our Covid-19 protocols, staying within the bubble of six groups set for the whole weekend.”

Our next event is the rescheduled British Master’s taking place in Sidcup, next Sunday 25th October. Closing date for entries is Wednesday 21st October.