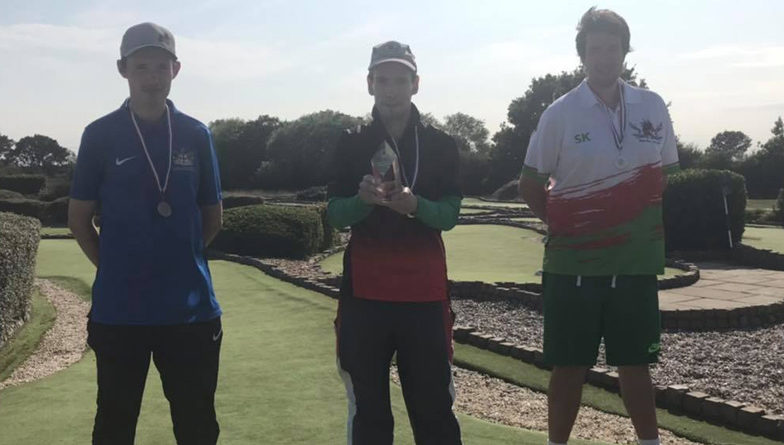 The weekend of Saturday 19th and Sunday 20th September saw the rearranged British Open take place at Dunton Hills Family Golf Centre. The weekend as expected proved to be grueling, but nonetheless a great success.

Our thanks go to the team at Dunton Hills for accommodating us at short notice, and to the players for accepting the challenge that Dunton provides and playing in the spirit expected.

There were a variety of prizes available over the course of the weekend and the prize winners were as follows:

Cambridgeshire and Essex retained the trophy ahead of Planet Hastings in second, Thanet Silverbacks third and the Welsh Minigolf Club fourth.

In the Category 4 competition:

In the Category 3 competition:

In the Category 2 competition:

In the overall standings:

Will Donnelly (Midlands) finished in third place raking the bronze medal for the third time in the Open, with a seven-round total of 300, winning £30.

Seve Kukielka (Welsh) finished second winning £40 and the silver medal. He had a seven-round total of 294 which included a fantastic 38 in round three.

Once again it was Michael Smith who reigned supreme in taking the gold medal, and his seventh Open title, with a seven-round total of 283, which included three sub 40 rounds (a 37,3 9 and 38). MIchael took home the Open trophy and £50 for his performance.

Special mentions go to Chris Smith (Midlands) for his fourth-round 39, and James Rutherford (Cemgc) for hitting an incredible 10 Aces.

Full tournament results can be found at.

A variety of photographs from the weekend can be found on the BMGA Facebook account at https://www.facebook.com/BMGAMinigolf/

“I’m delighted to have won the 2020 British Open last weekend at Dunton Hills. When combining the difficulty of the course with the windy conditions, it made the tournament one of the toughest I have played in across my 11 years on the BMGA Tour. I’m really proud of my 7 round score, which was lower than I was expecting before the tournament. I’m very grateful to the staff at Dunton Hills Family Golf Centre for giving us exclusive access to the course for both days and to the BMGA Executive Committee for the fantastic organisation of the tournament despite having to grapple with increased social distancing guidelines.”

Thanks to all that participated this weekend. The course served up a great competition, where there were still opportunities for participants of all categories to take a top 3 spot in their respective groups.

Michael continues show the rest how consistent you need to be to take a title from his grasp. Stay safe everyone and hope we can play another tournament with our Covid safe protocols in the near future.