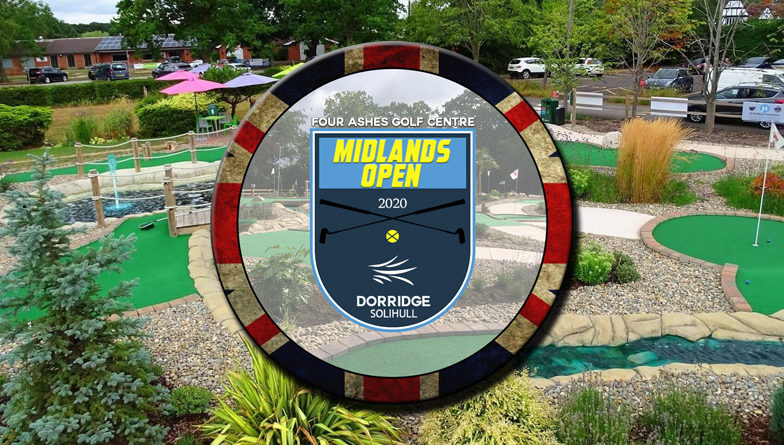 The tournament, trophy and gold medal were won by Chris Harding, on an outstanding score of 96 shots. It completed a hat-trick of wins in this event for one of British minigolf’s greatest ever players. Michael Smith secured the silver medal in 2nd place on 101 shots, while Seve Kukielka secured the bronze medal in 3rd place on 105 shots.

Huge credit also goes to (amongst others):

Reflecting upon his victory, Chris Harding said: “It was with some trepidation that I returned to the course. How would I play? Would I enjoy it? Being paired with Steve Lovell was a big help with us spurring each other on to both shooting course records in the opening round. The rest wasn’t as good but I managed to go bogey free on rounds 2 and 3. Almost like the old days. What really came to the fore was what a great bunch of people the minigolf community is. It was a pleasure to meet up with you all again and hopefully it won’t be as long until next time. Thanks to the Smiths for organising everything so well. And to Andy and the team at Dorridge for their hospitality and for providing such a good course.”

Full results from the 2020 Midlands Open can be found at this link:

This is the updated Midlands Open roll of honour:

The captain of Midlands Minigolf Club, Michael Smith, also spoke shortly after the tournament: “I’d like to thank Brenda and Chris Smith for all their hard in helping to organise and prepare for the tournament in advance and for all Brenda’s help on the day. In addition, I’d like to thank Andy and all the team at Four Ashes Golf Centre for their hospitality in hosting the tournament and for all their previous support of both the BMGA and MMGC. We particularly appreciate the course hosting us during the COVID-19 pandemic.

“I’d also like to thank all the players for travelling such a long way for an evening tournament. As I acknowledged at the beginning of the player’s pack, the requirement for everyone to implement social distancing put huge pressure on both the course and tournament organisers in the build-up to the event in addition to presenting challenges to the competitors during the tournament. The 2020 Midlands Open was not the tournament we wanted to run but it was our view that it was preferable to make the changes we did than not to have a tournament. Given that, we really appreciate the efforts the players made to get through the tournament quickly and for their cooperation throughout Saturday. We hope that the 2021 Midlands Open will be held in better times for the country and that all our community remains safe and healthy in the meantime.”

Finally, a black VTK Kent Minigolf Club decade ball was handed in. If anyone lost theirs during the tournament, please email midlandsmgc@yahoo.co.uk