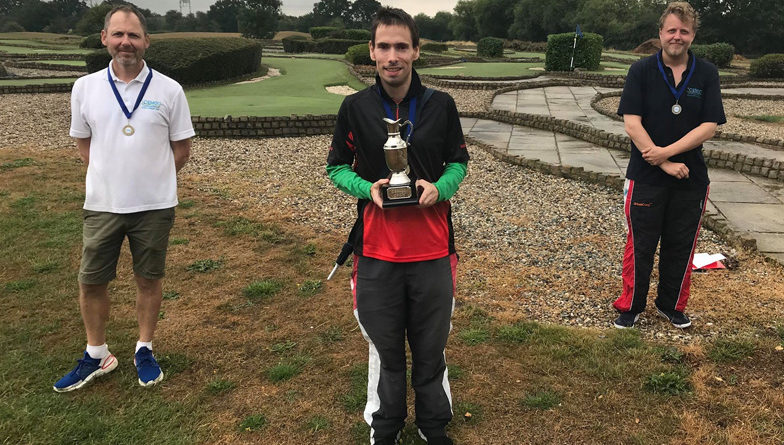 Saturday 15th August saw the restart of the 2020 BMGA calendar where 40 minigolfers took up the challenge that Dunton Hills presents.

It was a great result for Michael Smith with a stunning course record of 36 shots. Cemgc club captain, and tournament organiser, James Rutherford was seven shots adrift in taking the runner’s up spot, with teammate Martin Greenhead a further shot back in third.

Laura Skinner of the Welsh Minigolf club, had a fantastic performance in taking the Category 3/4 gold medal with Paul Tutt (Hastings) and Martyn Williams (Welsh) picking up the silver and bronze.

Martyn also took the Aces prize with four aces over the three rounds.

Speaking following his victory, Michael said “I’m delighted to have been at Dunton Hills this weekend for two fantastic tournaments. It was wonderful to see the BMGA membership and to get playing tournament minigolf again after what has been a very difficult period for most of the country. I’m very grateful to the staff at Dunton Hills Family Golf Centre for giving us exclusive access to the course for both days and to the CEMGC and BMGA Executive Committee for the fantastic organisation of the tournaments despite having to grapple with social distancing guidelines and the unpredictable British weather, including that unprecedented monsoon on Saturday afternoon! Finally, while I did play very well throughout the weekend, I want to pay tribute to my Doubles partner, Will Donnelly. He played superbly on Sunday and gave me very little to do!”

The last word from Cemgc Club Captain James Rutherford  “Last weekend saw the return of competitive minigolf in the UK for the first time since lockdown. I am sure that I speak on behalf of all the CEMGC when I say that the whole weekend was played in a fantastic spirit. It was wonderful to get back on the course but it was also wonderful to enjoy a small period of normality in the Essex rain and sun!

A huge congratulations must go to all players. The scoring was exceptional this year and of course, another great result for Michael with some fantastic scoring.

I look forward to seeing everyone back at Dunton Hills for the British Open and good luck in Peterborough!”

Full Results from the event can be found at: https://bmga.online/results/2020/2020CEMGCO/result.htm

The BMGA would like to thank James, all the CEMGC and Dunton Hills for once again allowing us to use their facilities in what proved to be another successful event. The next event on the BMGA tour will be Sussex WASPS Open on Sunday 30th August in Peterborough. Full details can be found at: https://www.facebook.com/events/3126710077427664/