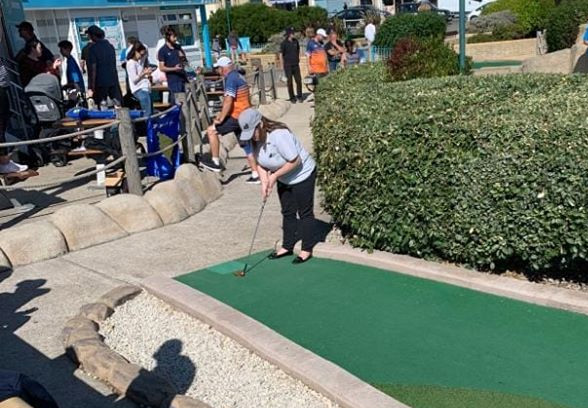 We’re back with another Player Focus. This time, a player who has a magnificent season last year, Shelley Cooper

What’s your Favourite Minigolf moment? I have a few favourite moments, one of them is finishing in the top 10 of a tournament, this had been 1 of my goals for some time. Its an amazing feeling when you achieve one of your goals.
Another is winning the womens category for 2019, such a fantastic feeling!
Also being in a matchplay final against Scott Lancley who introduced me to the BMGA! Like I said so many favourite moments

What’s your favourite Minigolf course and why? The Crazy course at Hastings. I really love the Arnold Palmer style courses and I have done from when I started playing minigolf. I find it a really fun and enjoyable course to play on.

How did you first get involved in the world of competitive Minigolf? I was playing the Strokes course in Margate for the first time back in April 2017 whilst on a short break in Kent. Whilst I was there i saw Scott playing. I got chatting to him and he then invited me to the next event which I attended and i have been hooked ever since.

Which event are you most looking forward to this year, and what are your hopes for 2020? I really love the World Crazy Championship because it’s on a course that i really like. The number of players is usually high too which is great as it creates a minigolf buzz that I love.
My hopes for this year is to finish in the top 5 of a tournament and anything higher than that would be a bonus.

Who is your favourite player to play against? There are several people I love to play against in a round…Martin Greenhead, Marion Hartley, Steve Lovell to name just a few. All 3 are very supportive during a round which I find helps me whilst playing.

Without choosing any big golf players, which famous person do you think would be the best Minigolfer? I don’t know if they would be a great mini golfer but I’d love to see Gordon Ramsay have a go…no particular reason other than I am a huge fan of his

If Minigolf had walk on music, what would your song be? I’m going to go with Alicia Keys Girl on Fire

Tell us three things about your life outside of Minigolf:
Firstly, I love photography. This is a recent hobby of mine so still learning but I love taking my camera out when I can. I particularly like taking photos of nature.
Secondly, I love food. I love eating out when I can and trying new food. My favourite meal is a roast dinner…i could eat one every day.
Thirdly, I love going on nature walks around nature reserves or parks etc

And finally, tell us your favourite (clean) joke: I am so awful with jokes…the simpler the better haha one of my favourites is:

My daughter asked me for a pet spider for her birthday, so I went to our
local pet shop and they were £70! Stuff this, I thought, I can get one cheaper off the web