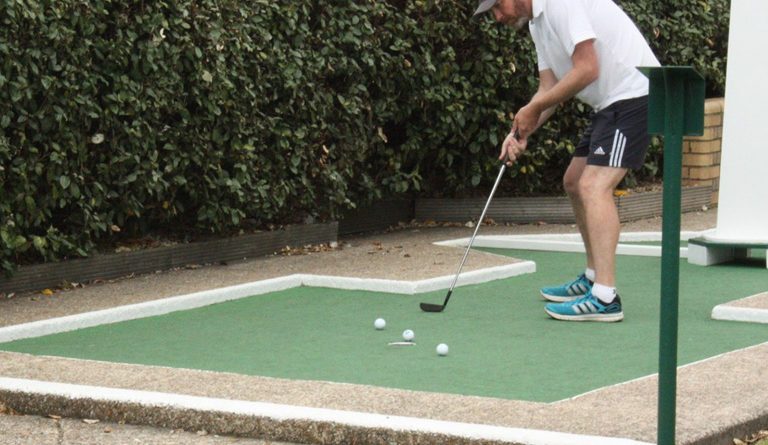 As we enjoy/endure (delete as appropriate) the time off, what better time for another instalment of our Player Focus series. Sticking with the team that was supposed to be going to the WAGM, here’s an Alien!

What’s your Favourite Minigolf moment? Winning the 2018 club championships with the CEMGC was a great moment and a bit of a miracle as we seemed to keep trying to give it away throughout the day. Mark and Chris Wood started at the same tournament as me (the 2012 Kent Open) and I played with James Rutherford at the 2014 WAGM in Sweden so I’ve known them a long time; winning with them was very special.

What’s your favourite Minigolf course and why? I love the Hastings courses but my favourite is Strokes in Margate. It always seems so straightforward in practice but when you play in a tournament every hole seems to get harder and more challenging, you can’t relax at all. It is a technical course and requires concentration all the way to hole 18.

How did you first get involved in the world of competitive Minigolf? I used to play cricket for Sidcup and one day a game was cancelled so Brian Smith had the idea of getting all of the players and families up the road to Dino Golf to have a Young Guns v OId Farts challenge (the trophy still sits on my desk as we won the rematch). I enjoyed it so much I googled to see if there were tournaments we could enter and saw that the Kent Open was taking place at Dino Golf. I entered with Brian and my son Ollie and got completely hooked.

Which event are you most looking forward to this year, and what are your hopes for 2020? I’m looking forward to the British Open in Hastings. I had a pretty ordinary tournament there in 2019 in amongst my best season, so I want to improve on my scores. I hope to make top 8 this year which will be tough with a lot of good players on the tour.

Who is your favourite player to play against? My deadly nemesis is Mark Wood. We practice together before tournaments and try to keep “game face” but usually one of us drops it. We have super friendly rivalry, I was really pleased when he won the British Masters last year. The fact he beat me in the OOM by about a point was gutting though!

Without choosing any big golf players, which famous person do you think would be the best Minigolfer? I would love to see Steve Davis on a course. He’d have the concentration and will to improve to be a great player. He’s an expert on angles so would get it very quickly.

If Minigolf had walk on music, what would your song be? Not sure why but “Let’s Hear It For The Boy” by Deniece Williams came in my head right away. A good one for the crowd to sing along to.

Tell us three things about your life outside of Minigolf: I’ve worked for BP since my 20s and am the co-chair of the Accessibility group for our office of about 1500 people. We cover invisible and visible disabilities, including mental wellbeing and it’s something that I am passionate about. My wife Sally has a vintage business, so I spend my non minigolf weekends driving around the country in our van, either picking up stuff or delivering. It’s good fun and a change from my day job, although lugging sideboards is the worst part of it. In December I was waiting on a telephone call to start and decided to learn the Rubik’s cube to pass the time. I’m down to about 90 seconds, it’s a very good way to destress. I’m happy to teach anyone who’s interested in learning it.

And finally, tell us your favourite (clean) joke: I love Doctor Doctor jokes, but this is my favourite (I normally wheel it out whenever someone tells me they do yoga): I wanted to take up yoga so phoned up the teacher to see if I should do the beginner or intermediate class. She said “Are you flexible?” I replied “Well I can’t do Tuesdays”

We also asked players to provide a favourite minigolf photo of themselves for the header image. Martin’s didn’t show him clearly, but it’s such a good photo we have to include it:
Here is also my photo from the 2018 WAGM. I stumbled across it on the internet recently and I like it because I am in the centre but Will and Dave Donnelly are watching. You can other GB players there too in the background. 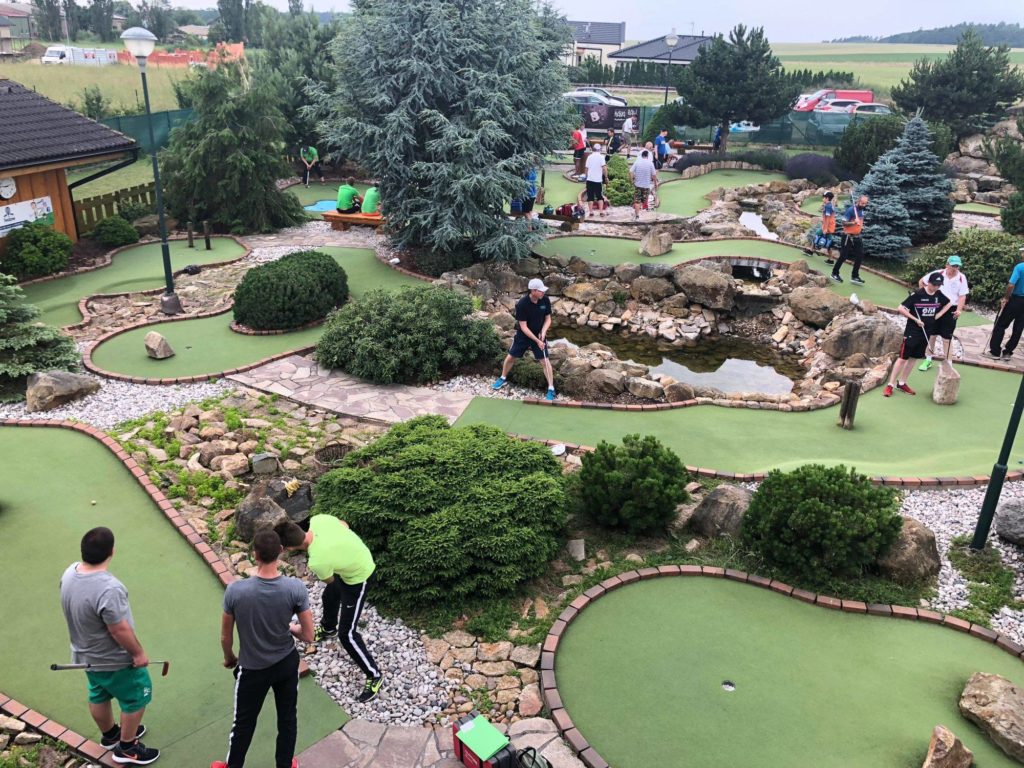