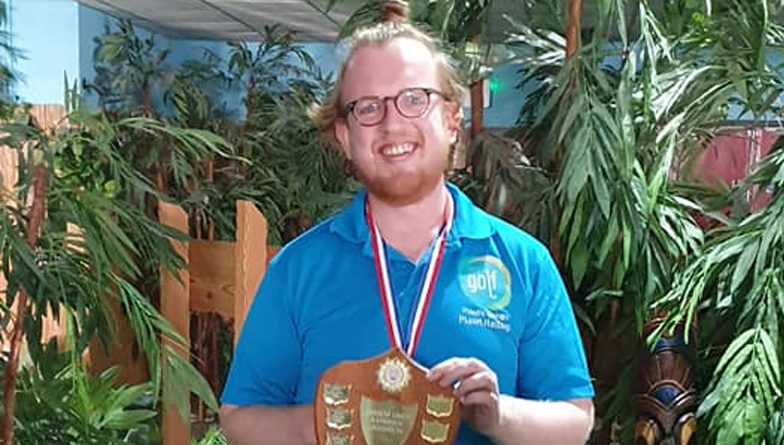 What’s your Favourite Minigolf moment? The last tournament of the year Star City, I had so much fun and was really pleased with my mental outlook. I knew going in to the tournament I had to finish really high up the leaderboard to make the cut for Team GB. I ended up hitting a 28 and a 29. But most importantly I had fun! I very wise man, and my former captain, Ted McIver gave me the advice to try and play without ever thinking about your score. I think during that tournament I was able to implement Ted’s advice and just play every hole like it were my last and really enjoy being there. The whole weekend was actually wonderful. Due to a last minute B&B cancellation, I had to book my partner and I in to a hotel (The Clover) which happened to be the UK’s only naturist friendly hotel (an honest mistake I promise). We were both apprehensive at first but ended up having the most wonderful time.

What’s your favourite Minigolf course and why? The Arnold Palmer course at Hastings is definitely up there. It brings back fond childhood memories of playing the same course at Butlins. In fact, a regular occurrence my Mother tells me, is that on the last day of the Holiday, when she had to drag me off the course I would try crying uncontrollably. I grew out of that though as I entered my mid twenties. If I had to pick one though,the Tiki Bar at Lost City Nottingham pushes it over the edge for me.

How did you first get involved in the world of competitive Minigolf? I was bored at my desk one day at work and thought to myself “I wonder if there is a World Championship Competition in mini golf”. Turns out there is! And it’s in Hastings! Anyway once I looked in to that I came across the BMGA. Didn’t really know what to expect. I had Googled “traditional golf clothes” the week before the first game to make sure I didn’t look out of place. But I may have overdone it (as you can see below). 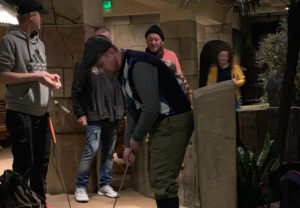 Which event are you most looking forward to this year, and what are your hopes for 2020? It’s got to be the WAGM, it’s a once in a lifetime opportunity.

Who is your favourite player to play against? Any player that I can learn something from by stealing observing their lines. It was a fantastic experience being paired with Scott Lancley in the final of the Thanet Tournament (Scott went on to win the tournament). I learned a lot from Scott and saw some crazy things that I had never seen before (that seemed to work!)

Without choosing any big golf players, which famous person do you think would be the best Minigolfer? I think Fred Rogers would have been good, he is very calm and mindful and is also very kind to himself. Similar story for the Dalai Lama.

If Minigolf had walk on music, what would your song be? Glass Animas – The Other Side of Paradise

Tell us three things about your life outside of Minigolf:
I have three wonderful cats: Jelly, Pancake and Peanut.
I host a vegan cookery show.
I once appeared on TV – I was interviewed by The One Show on my way in to the Star Wars Episode IX premier

And finally, tell us your favourite (clean) joke:
Two elderly pairs of people are walking down the street. A pair of women followed behind by a par of men.
Barry: Did you get up to anything last night John?
John: Oh yes! I went out to the most wonderful restaurant. Had an absolutely delicious meal, three courses, beautiful desert, and everything thing was very reasonably priced.
Barry: Wow, that sounds amazing. I don’t suppose you remember the name of the restaurant?
John: Hmmmm. Do you know that name of that flower, it has red petals, a beautiful scent, and some prickly bits
Barry: That would be a rose John
John: Yes! You are right, that’s it…… “ROSE, WHAT WAS THE NAME OF THAT RESTAURANT WE WENT TO LAST NIGHT?”