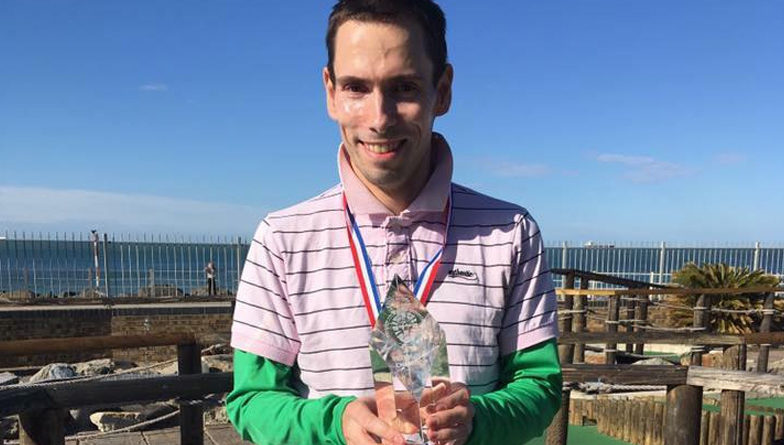 This is the first in our Player Focus series, and who else could we start with but the British number 1!

What’s your Favourite Minigolf moment?      It’s hard to choose one but my debut tournament at Star City, January 2010, is right up there. I met so many nice people and loved both the challenge of the course specifically and the sport in general. I was hooked on the sport from that point and was incredibly obsessed with minigolf for several years following that.

What’s your favourite Minigolf course and why?  The Pirate Course, Hastings. It’s a great mix of direct and rebound shots; and also offers so many genuine ace opportunities while still having enough jeopardy to make dropped shots a concern.

How did you first get involved in the world of competitive Minigolf? I put the words ‘indoor minigolf courses UK’ into google because I was remembering how much I had enjoyed playing an indoor course in South Africa many years before that and I was curious to see if there was anything similar nearer home. One of the first websites that came up was the website of the British Minigolf Association. It looked interesting, so entered into the first BMGA Tournament I could, which was the aforementioned Star City Open in 2010, and never looked back.

Which event are you most looking forward to this year, and what are your hopes for 2020? The British Open, because it is two days of minigolf on the Pirate. I just want to play well and do myself justice every time I enter a tournament where proper minigolf balls are used. Anything on top of that is merely a bonus.

Who is your favourite player to play against? I like playing against anybody who is polite and doesn’t cheat or tries to win through unethical means. But my favourite player is always whichever course I am playing on, even though the course will always beat me.

Without choosing any big golf players, which famous person do you think would be the best Minigolfer? Roger Federer. His tennis technique is flawless, he’s a fabulous tactician and he’s calm enough to cope with the mental ups and downs of the sport. For me he’s one of the greatest sportsmen and women of all time and would be an incredible minigolfer.

If Minigolf had walk on music, what would your song be? This was the hardest question of the interview! I’ll go with Queen’s ‘Don’t Stop Me Now!’

Tell us three things about your life outside of Minigolf:  One, I’ve recently started studying a PhD. Two, my hobbies include reading, watching movies, watching sport and running (albeit that is arguably a necessity as much as a hobby). And three, my favourite food is Italian; I love pasta, lasagne and pizza so much!