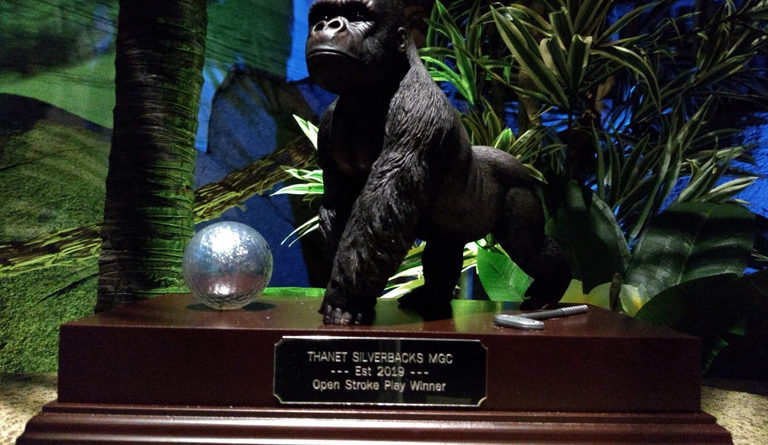 Storm Ciara may have gripped the whole of the UK this weekend, but 38 mini golfers still assembled early Sunday morning with the intent to take the Thanet Silverbacks trophy back to their home.
As a golf ball only tournament, this year many of the participants felt they had the chance at the Lost Island Adventure Golf course, Margate.In the first round the reigning Champion Michael Smith and his father Chris, posted rounds of 34,33 respectively along with youth player Matt Exall. Local club member Andy Exall was in contention (34) joined by the youngest player on the course fellow club member Cam Fincher.By the end of round 2, Chris Smith (shooting 31) led the field with a total of 64. Thanet Silverbacks Captain Scott Lancley, shot a course record equalling 30, to move into contention 3 strokes behind Chris. Ed Pope (from Leicester) and Seve Kukielka (from Cardiff) creating rounds of 32 led the rest of the chasing pack.
By the end of round 3, Ed finished 4th after a sudden death 1st hole playoff with Seve on a total of 102. Mean while Chris Smith, although producing a clean round only found one hole in one to end with a round of 35 and a total of 99 to take 2nd place.
Could the local Captain take the title?..
Starting his final round once again with double Aces at the first two holes, picking up a further 3 along the way and finishing with an Ace at the 18th, Scott after 94 strokeplay ranking events and 13yrs, finally claimed a title, his very own Thanet Open (with total 97 shots, 11 under par.)
Family Smith stroke consistency saw Brenda Smith shoot a great round of 32 and take the Category 2 winner spot two strokes less than Runner-up Shelly Cooper (TSMGC.) Stephen Skinner 3rd (Welsh MGC.)
Cat 3 winner was 10th placed Cam Fincher with Richard Jones (from Manchester) 1 stroke behind, and 4 strokes in front of another youth; Chloe Allart-Bennett placing 3rd.This year marked the first Thanet Open tournament without club member Dave Donnelly. To commemorate this, Jean and Will Donnelly presented the New Novice title bearing Dave’s name, to the great performing 10th place Cam Fincher (age 10, from West Malling.)
Aces prize going to Ed Pope (13 aces.)
Thanet Silverbacks would like to thank the course and all those that participated this weekend. All participants made it safely home, travelling back through Storm Ciara.Next BMGA ranking event: PHCGC Open, Ist March,in Hastings